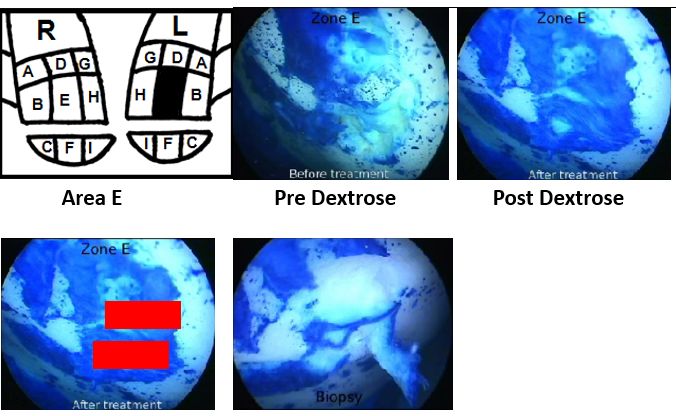 Nothing has been found that, upon injection, stimulates regrowth of cartilage over the entire joint surface in those with osteoarthritic knees that has become bone on bone.  However,  to determine if some new growth occurs from dextrose injection, Topol et al performed a "proof of principle" study. The abstract from that study is below but here is a picture that illustrates how it was done.

The illustration with the R and L and letters shows the areas on the R and L knee from which the biopsy could be taken.   The pre and post dextrose picture were taken of the knee and in each case a dye was injected that stains cells. The white area is bone surface that has no cartilage left. The blue areas indicate cells on the surface of cartilage.  The Pre Dextrose photo showed a depressed area in the surface of the bone, and the Post Dextrose photo shows some of that area filled in with more cells. The question then is, what kind of cells. To determine that, biopsies were taken of areas of new dye uptake.  The photo with the red boxes showed the biopsy areas and the picture to its right shows the area after biopsy. These are standard ways to confirm location. Then, the biopsies were evaluated for type of cartilage by specialized tests such as quantitative polarized light microscopy (QPLM).  Here is the abstract from that study. In addition, 3 readers masked to before or after status of the arthroscopies, evaluated regions A-I on each treated knee to determine which, if any, showed more cartilage.