Poor evidence for  most treatments prescribed in everyday medicine.

The BMJ (British Medical Journal) Clinical Evidence compiles a database showcasing the best available evidence on common clinical interventions. The BMJ team reviewed the level of recommendation for 3,000 treatments across general medicine for which randomized controlled trials were available and rated each treatment according to benefit versus risk.  http://clinicalevidence.bmj.com/x/set/static/cms/efficacy-categorisations.html (Accessed March 17, 2018.  Their results are summarized in  the bar graph.  The total for all bars adds up to 100% .
Through use of randomized controlled trial evidence, only 11% of treatments reviewed across general medicine have a strong (equivalent to SOR A) level of recommendation and 24% have a favorable, although not strong (equivalent to SOR B), level of recommendation. Although this does not indicate choices of treatment for individual practices, it implies that nearly 2/3 of common clinical interventions in everyday practice do not have moderate or good evidence basis.
How Does Dextrose Prolotherapy Evidence Compare?
Despite the need to almost completely self-fund clinical trials, and donate all treatment time because of lack of proprietary (drug company or manufacturer) interest in research, here is what the evidence looks like at this point in time (updated to 2019) for dextrose prolotherapy. Level B = Likely to be beneficial (see above bar graph). On the left are the areas with level B evidence. Along the top are the names of the authors who have published meta-analyses summarizing the body of research in each area, and the year of publication, 2015-2019. 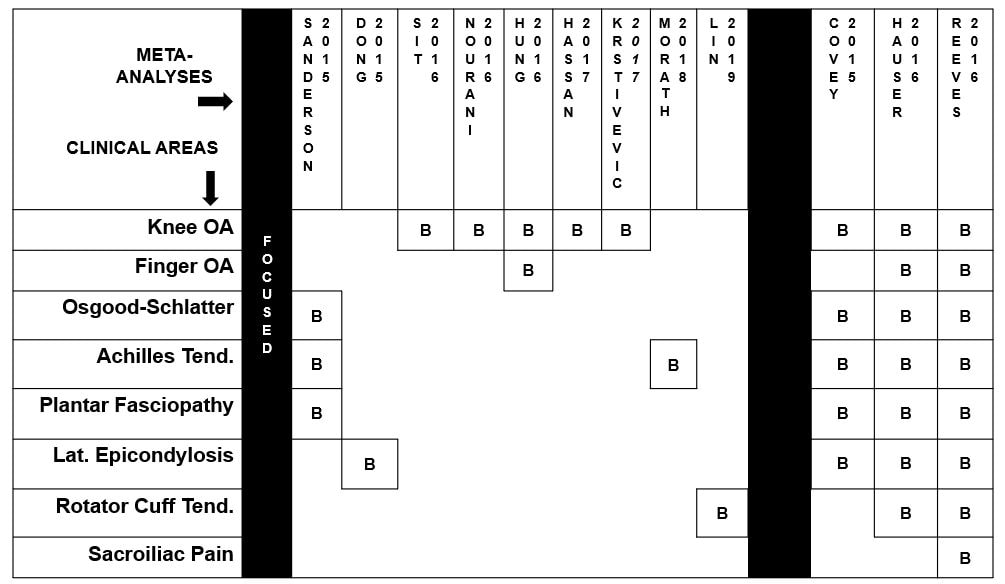 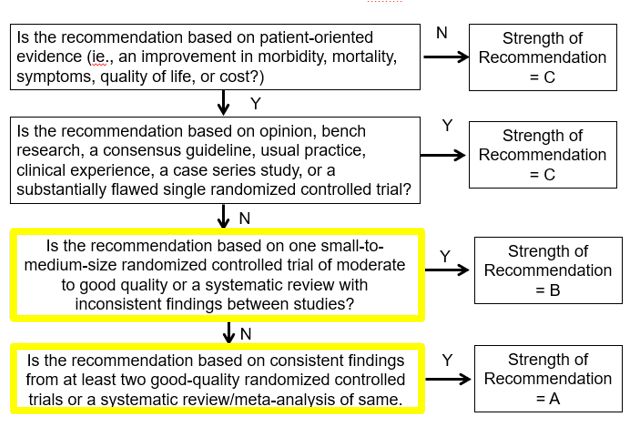 How is a Strength of Recommendation Determined?
The two primary systems for overall evidence evaluation are Strength of Recommendation Taxonomy (SORT) and Grading of Recommendations Assessment, Development and Evaluation (GRADE). The “Strength of Recommendation Taxonomy (SORT) system is simpler, more user-friendly, and was developed by a collaboration among family medicine editors. The process of coming to a rating conclusion on a strength of recommendation (SOR) using SORT taxonomy is described the flow chart above. Simply speaking, if one favorable small to medium size randomized controlled trial (RCT) has been published, or if a meta-analysis showed favorable but inconsistent findings between studies the level of evidence is B. One can easily see that unless multiple studies are available of moderate or larger size that agree closely with each other, level A evidence if not present. Thus, only a few treatments used in medicine today have level A evidence. In this research section the emphasis is on randomized controlled trials only, since that is the strongest type of clinical data available, with the exception of meta-analyses in which the results from two or more randomized controlled trials are combined or reviewed.
Why are so many treatments in general medicine done with not much evidence of benefit and why is dextrose prolotherapy not covered by insurance?
It is important to keep in mind that treatments which are commonly done are considered "customary or usual practice" so they typically they do not undergo scrutiny as to their effectiveness.
The second question is more complex, but when treatment is considered for coverage by an insurer, unless it is so common that the insurer has to consider it customary or usual, the insurer will not cover it unless there is level A evidence, which sets the bar quite high, and yes, higher than most treatments given today.  That is why researchers in prolotherapy don't expect insurance coverage any time soon. Instead, they focus on slowly building the body of evidence through the dedication of individual young researchers willing to sacrifice their their time and money. Meanwhile, researchers expect that more and more doctors (and patients) will become so frustrated with the customary treatments that are covered by insurance, that virtually all new physicians will eventually be learning prolotherapy, forcing insurers to cover it.
Is there evidence that dextrose prolotherapy (DPT) is entering  "academia"?  (Being taught at academic institutions): Yes.
DPT is taught as routine curriculum in the:
• Harvard Department of Physical Medicine and Rehabilitation, Massachusetts General Hospital and Spaulding Rehabilitation Hospital Integrated Sports Medicine Fellowship.
• National Capital Consortium (NCC) Physical Medicine & Rehabilitation Residency Training Program at Walter Reed Medical Center.
• University of Wisconsin Department of Family Medicine and Community Health.