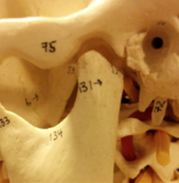 ​TEMPOROMANDIBULAR DYSFUNCTION
RCT #1 Mustafa R, Güngörmüş M, Mollaoğlu N. Evaluation of the Efficacy of Different Concentrations of Dextrose Prolotherapy in Temporomandibular Joint Hypermobility Treatment. J Craniofac Surg. 2018 Jul;29(5):e461-e465.
Link to PubMed abstract of Mustafa et al.
Summary of Study Design:   Randomized clinical trial of injections into the posterior disc attachment, superior joint space, superior and inferior capsular attachments using a total of 3 ml of either .45% saline/1% lidocaine (control),  10% dextrose/1% lidocaine, 20% dextrose/1% lidocaine, or 30% dextrose/1% lidocaine.  Injections were given at 0, 1, 2, and 3 months.  Data was gathered before each injection and at four months.
Candidates:   Painful subluxation or dislocation of the TMJ, history of open-locking, and complaints of joints sounds and faciial pain, coupled with examination indicating abnormal excursion of the condyles. A minimum pain duration was not indicated.
Study size:   40 participants with 40 joints were enrolled.
Bias:   There was no indication whether initial data was obtained before or after group assignment (allocation not described).  The method of randomization was not described.  Both of these are sources of potential bias.
Measures:  Use of a 0-10 VAS for pain, but it is unclear if this was a 0-10 Numerical Rating Scale (NRS) instead,  where only whole numbers are chosen.  The maximum mouth opening (MMO) was measured in mm as the distance between the incisal edge of upper and lower incisors, but not mentioned was whether a measurement tool was used to standardize that measurement.  A subjective indication of the presence or absence of joint sounds and frequency of locking episodes per month was recorded as well.
ITT versus Per Protocol Data Analysis:  Per protocol analysis was performed with the exclusion of any data from the three patients whose data was absent during the follow-up period. Their time of dropout was not indicated and from which group, as there was no flow chart provided.
Other treatments:  No mention was made whether participants could use previously fabricated splints.
Results:   The tables did not indicate an n for each subgroup.  No baseline between group differences were observed. MMO decreased markedly in each group through 4 months (8.9 mm [control}, 14.9 [10% dextrose], 10.9 [20% dextrose] and 14.6 [30% dextrose]), with no significant differences between groups. Pain decreased markedly in each group with change scores of 2.6 (control), 4.6 (10% dextrose), 5.1 (20% dextrose), and 4.6 (30% dextrose), with no significant differences between groups.   Joint sounds reduced substantially in all groups.
Comment on results:
●This study was underpowered to detect dextrose between-group differences, since it did now show a difference from control injection, although it suggested similar effects of various concentrations.
● Every dextrose group outperformed the control group in pain improvement by at least 2.0 on a 0-10 scale, which is clinically important.  If the dextrose group data was gathered into a group with a larger n, dextrose would very likely have outperformed control (saline/lidocaine) injection, but that comparison was not made.
● Like all other published studies which included injection of the temporomandibular capsule, dramatic reductions in mouth opening resulted, in this study with a mean of 12.3 to a mean mouth opening of 40.8. This approaches the level of 40 mm mouth opening, which represents the threshold for impairment in mouth opening.   This should be considered an unwanted side effect because Refai et al, using pre and post tomographic comparision of the TMD, demonstrated convincingly that reducing mouth opening by dextrose injection does not result in a measurable improvement in actual joint subluxation.  Refai H. Long-term therapeutic effects of dextrose prolotherapy in patients with hypermobility of the temporomandibular joint: a single-arm study with 1-4 years' follow up. Br J Oral Maxillofac Surg 2017;55:465-70. Thus tightening the joint capsule appears to be without useful purpose and raises in question the inclusion of capsular injection in any protocol.
● This study once again showed that injection of the TMJ in multiple locations has a needling effect or another effect that is considerable on the joint capsule and TMJ function (it is not a placebo treatment.)  This was seen in the resultant reduction in mouth opening the saline group as well. (8.9 mm)
● Pain and functional improvements were each reduced substantially in dextrose-treated patients, and these improvements are likely attributable to other effects of dextrose other than proliferative. A direct benefit of dextrose on neurogenic pain has been proposed.

RCT #2 Louw WF, Burrils F, Reeves KD, Cheng AL, Rabago D. Treatment of temporomandibular dysfunction with dextrose prolotherapy: A randomized controlled trial with long term follow-up Mayo Clin Proc 2019;pii: S0025-6196(18)30678-5.
Link to full article
DR LOUW'S VIDEO EXPLAINING THE STUDY
Summary of Study:
Design:   Double blind randomized trial with participants randomized 1:1 to 3 monthly intraarticular only injections  with a closed mouth approach with a 30 gauge needle of 1 ml of either 20% dextrose/0.2% lidocaine or 0.2% lidocaine, followed by 9 months of open label treatment as needed with 20% dextrose/0.2% lidocaine.
Candidates:   Jaw pain > 3 months with both pain and dysfunction  rated ≥ 6/10 on a 0-10 Numerical Rating scale (NRS)  Dysfunction was defined as “difficulty chewing, jaw fatigue with eating, tension in jaw, or grinding of teeth.” Myofascial, discal or joint related temporomandibular dysfunction types were enrolled.
Study size:   54 joints included from 42 participants.
Bias:  Group assignment was by a research assistant who did not interact with participants or participate in scheduling using computer-generated block randomization. She also was responsible for pulling up the appropriate solution by accessing the password-protected randomization list.  All other clinical personnel and participants were masked.  Data was gathered prior to blinded randomization,  consistent with non-biases allocation, according to primary author, but this was not stated in the text.
Measures:  Numerical rating scale (0-10) for facial pain and jaw dysfunction, maximal interincisal opening in mm, and percentage of joints with 50% or more improvement in pain and function.
ITT versus Per Protocol Data Analysis:  Intention to treat analysis was used. Two dropouts from DPT group occurred, one due to a parotid tumor and one due to an international move. Their last data was carried forward.
Other treatments:  Participants were allowed to continue to use dental splints that were already in use.
Results:  The DPT group  at 3 months in comparison to the control group reported significantly less jaw pain (4.3±2.9 versus 1.8±2.7 points; P=.02), less jaw dysfunction (3.5±2.8 versus 1.0±2.1 points; P=.008), and improved mouth opening (+1.5±4.1 mm versus -1.8±5.1 mm; P=.006) After both groups received DPT, by 12 months pooled data showed jaw pain, jaw function and MIO improved by 5.2±2.7 points (68%), 4.1±2.8 points (64%), and 2.1±5.5 mm respectively. Pain and dysfunction improved by at least 50% in 38/54 (70%) and 39/54 (72%) of jaws respectively by 1 year.
Bottom Line Temporomandibular Dysfunction 2019 Louw: Three monthly  intraarticular injections of dextrose outperformed saline at 3 months follow-up.  When both groups were provided dextrose injections open label after 3 months, improvement increased in both pain and mouth opening ability.

RCT #3: Zarate MA, Frusso RD, Reeves KD, Cheng AL, Rabago D. Dextrose Prolotherapy Versus Lidocaine Injection for Temporomandibular Dysfunction: A Pragmatic Randomized Controlled Trial. J Altern Complement Med. 2020 Nov;26(11):1064-1073. doi: 10.1089/acm.2020.0207. Epub 2020 Aug 11. PMID: 32780636.
Link to Zarate et al. abstract
Design:   Double-blind randomized trial with participants randomized 1:1 to 3 monthly intraarticular only injections using a closed mouth approach with a 27 gauge needle of 1 ml of either 20% dextrose/0.2% lidocaine or 0.2% lidocaine, followed by nine months of open-label treatment as needed with 20% dextrose/0.2% lidocaine.
Candidates:   Jaw pain > 3 months with both pain and dysfunction rated ≥ 6/10 on a 0-10 Numerical Rating scale (NRS).  The authors defined dysfunction as “difficulty chewing, jaw fatigue with eating, tension in the jaw, or grinding of teeth.” All three categories of temporomandibular dysfunction (TMD) were enrolled. (myofascial, discal, and joint-related).
Study size:   29 participants with 43 joints
Bias:  Group assignments performed by a separate research physician using computer-generated block randomization who did not interact with participants and kept a  password-protected randomization list.  At each visit, both solutions were drawn up by treating physicians and given to a charge nurse. The charge nurse also did not interact with participants, called the separate research physician for group assignment, and discarded the solution not to be used. She then delivered the solution to be used to the treating physician, identified only by participant name.  All other clinical personnel and participants were masked.  Whether data was gathered prior to randomization was not described.
Measures:  Numerical rating scale (0-10) for facial pain and jaw dysfunction, maximal interincisal opening in mm, and percentage of joints with 50% or more improvement in pain and function.
ITT versus per protocol analysis: There was one dropout from the dextrose group due to clinic access issues and one from the control group due to an international move.  Last data was carried forward for each for analysis by intention to treat..
Other treatments:  Participants were allowed to continue to use dental splints that were already in use.
Results:  At 3 months more DPT-treated joints improved by ≥ 50% in pain (17/22 vs. 6/21; p = 0.028).  Minimal treatment was received after 3 months,  and 12 month analysis by original group revealed that joints in the original DPT group improved more in jaw pain (4.8 – 2.4 points vs. 2.6 – 2.9 points; p = 0.026) and jaw dysfunction (5.3 – 2.6 points vs. 2.7 – 2.3 points; p = 0.013). In addition,  more DPT than lidocaine-treated joints improved by >50% in both pain (19/22 vs. 5/21; p = 0.003) and dysfunction (17/22 vs. 7/21; p = 0.040).
Bottom Line Temporomandibular Dysfunction 2019 Zarate:  Dextrose injections monthly X 3 outperformed saline at 3 months in percentage with >50% improvement in pain, and at 12 months  in pain, function and percentage  with >50% improvement in pain.  Minimal injections after 3 months demonstrated durability of improvement. Mouth opening improved.  Injections after 3 months were open label but Argentina saline injection is used as an active treatment.