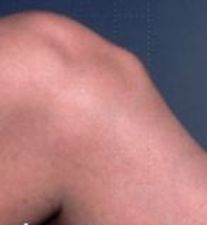 ABSTRACT
OBJECTIVE: To examine the potential of dextrose injection versus lidocaine injection versus supervised usual care to reduce sport alteration and sport-related symptoms in adolescent athletes with Osgood-Schlatter disease.
PATIENTS AND METHODS: Girls aged 9 to 15 and boys aged 10 to 17 were randomly assigned to either therapist-supervised usual care or double-blind injection of 1% lidocaine solution with or without 12.5% dextrose. Injections were administered monthly for 3 months. All subjects were then offered dextrose injections monthly as needed. Unaltered sport (Nirschl Pain Phase Scale < 4) and asymptomatic sport (Nirschl Pain Phase Scale = 0) were the threshold goals.
RESULTS: Sixty-five knees in 54 athletes were treated. Compared with usual care at 3 months, unaltered sport was more common in both dextrose-treated (21 of 21 vs 13 of 22; P = .001) and lidocaine-treated (20 of 22 vs 13 of 22; P = .034) knees, and asymptomatic sport was more frequent in dextrose-treated knees than either lidocaine-treated (14 of 21 vs 5 of 22; P = .006) or usual-care-treated (14 of 21 vs 3 of 22; P < .001) knees. At 1 year, asymptomatic sport was more common in dextrose-treated knees than knees treated with only lidocaine (32 of 38 vs 6 of 13; P = .024) or only usual care (32 of 38 vs 2 of 14; P < .0001).
CONCLUSIONS: Our results suggest superior symptom-reduction efficacy of injection therapy over usual care in the treatment of Osgood-Schlatter disease in adolescents. A significant component of the effect seems to be associated with the dextrose component of a dextrose/lidocaine solution. Dextrose injection over the apophysis and patellar tendon origin was safe and well tolerated and resulted in more rapid and frequent achievement of unaltered sport and asymptomatic sport than usual care.

Participants had statistically similar baseline characteristics. DPT resulted in more improvement of the NPPS score at 3 months than either lidocaine injection or usual care (3.9±0.3 points vs 2.4±0.3 points vs 1.2±.4 points; p<.05) and lidocaine injection was superior to usual care (p<.05).  At 1 year 32/38 (84%) of knees treated with DPT were asymptomatic (NPPS = 0) compared to 6/13 (46%) or 2/14 (14%) of knees receiving lidocaine injection or usual care throughout the year. (Fig.25)
RCT #2: Nakase J, Oshima T, Takata Y, Shimozaki K, Asai K, Tsuchiya H. No superiority of dextrose injections over placebo injections for Osgood-Schlatter disease: a prospective randomized double-blind study. Arch Orthop Trauma Surg. 2020 Feb;140(2):197-202, along with letter to editor Rabago D, Reeves KD, Topol GA, Podesta LA, Cheng AL, Fullerton BD. Infrapatellar bursal injection with dextrose and saline are both effective treatments for Osgood-Schlatter disease. Letter to editor for: No superiority of dextrose injections over placebo injections for Osgood-Schlatter disease: a prospective randomized double‑blind study https://doi.org/10.1007/s00402-019-03297-2. Arch Orthop Trauma Surg. 2020 Apr;140(4):591-592
Here is link to Nakase et al.  The letter to the editor PDF is available by request to Dr Reeves via email
Link to Nakase et al. abstract
Here's a summary of the article with comments from the letter to the editor included since the study used incorrect statistics and actually supports a very different conclusion from that of its title.
Design:  Randomized, double-blind clinical trial open-label clinical trial of monthly X 3 injections of 2 ml of 10% dextrose in 0.5% lidocaine versus 2 ml of 0.5% lidocaine in 0.45% saline.  1 mL was injected in the infrapatellar bursa, and 1 ml in the suprapatellar bursa. No post-injection examination for injection completeness.
Candidates: Those with inhibited sport participation (running or kicking) due to anterior knee pain.  Pain located at proximal anterior tibial tuberosity.  Failure of 1 month of conservative therapy.  Examination specificity was unclear.
Study size:  49 knees from 38 participants (37 boys; 25 dextrose treated and 24 saline treated)
Bias: Neither allocation or randomization methods were described.
Measures: Change in VISA-P score from 0 to 3 months.
ITT versus Per Protocol:  Per protocol. Six knees were not included because of fear of 2nd injection, 3 knees from each group.
Other treatments:  Sports activities were not limited after injection.
Results:  Authors reported no between-group differences
Errors/Major Limitations:
- Incorrect between-group comparisions were performed.  The authors compared raw scores at 1, 2, and 3 months rather than change scores for each group from baseline to 1, 2, or 3 months.  Because of baseline differences between groups the change scores would likely have favored dextrose with change scores of 18.2 versus 9.2 at 1 month and 27 versus 19.8 at 3 months.
- There was no control exercise group. Two injection methods were compared, and repetitive needling is not a placebo intervention. Change scores of 27 and 19.8 both exceeded the MCID for VISA-P of 13 for patellar area pain, consistent with and active treatment effect.
- The injection method was bursal rather than over the patellar tendon enthesis,  and the primary pathology is more likely an enthesopathy equivalent.
- The injection method completeness was not evaluated by a single leg squat, preventing confirmation that the correct nociceptive source was injected.
Conclusions:  This study, due to incorrect statistical methods, absence of an exercise control, different injection locations, and not including a check for injection completeness, still demonstrated significant improvements in both injection groups that appear to favor dextrose based on change scores, although primary data was not provided for a definitive confirmation.  This would be a  level C study because it is essentially a treatment comparison study with key errors that prevent a definitive conclusion.

RCT #3 Wu Z, Tu X, Tu Z. Hyperosmolar dextrose injection for Osgood–Schlatter disease: a double-blind, randomized controlled trial. Arch Orthop Trauma Surg. 202110.1007/s00402-021-04223-1.
Here is a link to the abstract of that article
Link to Wu 2021 abstract on Osgood Schlatter disease
Summary is as follows:
ObjectiveOsgood–Schlatter disease (OSD) is one of the common causes of long-term knee pain, leading to functional limitations, long-term deformity of the tubercle interfering with kneeling, and impaired peer-important sport participation. This study examined the use of hyperosmolar dextrose injection in patients with OSD.
MethodsThe researchers conducted a randomized, double-blind clinical trial of 70 participants, half receiving dextrose injection (12.5% dextrose) and half receiving saline injection. The injections were conducted under ultrasound guidance. The Victorian Institute of Sport Assessment (VISA) score was used to assess each patient's pain and sport level.
ResultsThree important takeaways. both groups improved a lot, in important ways, indicating that saline is an active control, simlar to how Topols study showed that injection with anesthetic was an active control.  Depite both groups improving, the dextrose group outperformed the saline group in improvement in their key measure, the  VISA-Patella score  from 3 through 12 months at each point in time. The dextrose group improved too rapidly for spontaneous improvement to explain much of this change.
ConclusionAfter three injections, at the 6-month and 12-month follow-up visits, the VISA-P scores of the two groups were significantly improved; the dextrose group score was better than the saline group score, and there were significant differences between the two groups.