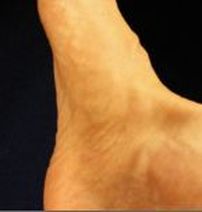 ​
​​​PLANTAR FASCIOSIS
​RCT#1: Kim E, Lee JH. Autologous platelet-rich plasma versus dextrose prolotherapy for the treatment of chronic recalcitrant plantar fasciitis. PMR 2014;6:152-8.
​
ABSTRACT
OBJECTIVE: To determine the efficacy of autologous platelet-rich plasma (PRP) compared with dextrose prolotherapy (DP) in patients with chronic recalcitrant plantar fasciitis (PF) DESIGN: A single-blinded, randomized, controlled study.
SETTING: Department of Physical Medicine and Rehabilitation of a university hospital.
PARTICIPANTS: Twenty-one patients with a clinical diagnosis of chronic PF confirmed by diagnostic ultrasound (plantar fascia thickness >4 mm) were randomly assigned to the PRP group (n = 10) or the DP group (n = 11).
INTERVENTIONS: Each patient received 2 injections into the plantar fascia through a peppering technique under ultrasound guidance at an interval of 2 weeks, either with 2 mL of autologous PRP or 2 mL of 15% dextrose/lidocaine solution.
MAIN OUTCOME MEASUREMENTS: The outcome measures included the pain, disability, and activity limitation subscales, measured by means of the Foot Functional Index. Data were collected before the first injection, at 2 weeks (before the second injection), and at the 2- and 6-month follow-ups.
RESULTS:  All patients completed the follow-ups, with the exception of 1 patient in the PRP group. The mean Foot Functional Index total and subcategory score improvements were greater in the PRP group compared with the DP group (improvement with PRP vs DP, total: 30.4% vs 15.1%, pain: 29.7% vs 17.1%, disability: 26.6% vs 14.5%, activity limitation: 28.0% vs 12.4%). However, no statistically significant difference was noted at any follow-up. In the pain and disability subcategories, both groups showed significant improvements at the last re-evaluation. The PRP group also showed significant improvements in the disability and activity limitation subscales at the second re-evaluation.
CONCLUSIONS: Each treatment seems to be effective for chronic recalcitrant PF, expanding the treatment options for patients in whom conservative care has failed. PRP treatment also may lead to a better initial improvement in function compared with DP treatment.
​

​The two groups were statistically similar at baseline. The between-group difference in improvement on the FFI did not reach statistical significance at any point in time. (Figure 36) However, this is a comparison of two active treatment groups, both of which resulted in clinically significant improvement at more than twice the minimal perceptible change of 11.9 for the FFI in these participants with a mean pain duration of 2.9 years. This would be considered a positive treatmetn comparison study for dextrose prolotherapy, level of evidence B-.

RCT #2   Ersen O, Akpancar S, Seven MM, Akyildiz F, Yildiz Y, Ozkan H. A randomized-controlled trial of prolotherapy injections in the treatment of plantar fasciitis. Turk J Phys Med Rehab 2018;64:59-65.
Here is a link to the full PDF of that article
Ersen et al Plantar Fascia Study PDF
A summary of their article is here
•Design:  Randomized controlled study of 3 sessions at 3-week intervals of  ultrasound-guided injection of 13.5% dextrose in  .2% lidocaine into up to 5 different points versus plantar fascia and Achilles tendon stretching exercise three times weekly for three months under a therapist’s initial and intermittent guidance for 3 months and then instruction to perform exercises three times a day.
•Candidates:  The duration and severity of symptoms was not stated. Those with a heel spur were excluded without a clear explanation as to why.
•Study size:  60 enrolled (DPT 29  and control 31)
•Allocation/Randomization Bias: Computerized assignment into two groups but it was not mentioned  whether baseline data was obtained prior to revealing which group they were in. (Allocation was not described).  Moderate bias for that reason.
•Measures:  Visual Analog Scale (VAS), Foot and Ankle Outcome Score (FAOS), and Foot Function Index (FFI) at baseline and 1 year follow-up at last data collection. Excellent measurement tools.
•ITT versus Per Protocol: Per protocol (only 50 completed 1 years; 3 in DPT and 7 in control group were lost to follow-up)
•Other treatments:   All participants were given heel lifts and instructed to refrain from heavy loading activities.
•Results:  DPT outperformed saline on VAS and FAOS scores at 3 and 13 months.  THE FFI was significantly better at three months but did not reach significance at 1 year, although the dextrose group trended. At one year 77% in the DPT group had more than 50% improvement in pain, compared to 17% in the control exercise group.
•Limitations:  Candidates not clearly described. This would be level B- study evidence due to open label design and lack of adequate description of randomizaton and allocation.
•Bottom Line 2018 Ersen: Dextrose prolotherapy sessions every 3 weeks X 3 outperformed standard stretching exercises at 3 and 12 months.

RCT #3 Atlas EU, Askin A, Tosun A. Is hypertonic dextrose injection effective in the treatment of plantar fasciitis: A clinical randomized study. The medical bulletin 2018; 56(3):102-108
Link to full PDF of Atlas et al PDF on Plantar fasciocis via Research Gate
Here is a summary :
Design:  Randomized single blind controlled study of 3 sessions at 3 week intervals of injection of either 3 ml 15% dextrose (not stated if lidocaine was included) or 3 ml normal saline into plantar fascia-bone insertion point  with peppering technique.
Candidates:  Unilateral symptoms of plantar fasciosis (PF) for at least 2 months with minimal pain of 4 and pain over the calcaneal tubercle.
Study size:  30 enrolled, 15 in dextrose and 15 in saline groups.
Bias: Computerized assignment into 2 groups but who allocated and who was blinded other than the patient was not stated
Measures:  (VAS score), foot function index (FFI), and American Orthopedic Foot and Ankle Society (AOFAS) ankle-hindfoot scores at 3 months.
ITT versus Per Protocol:  ITT equivalent.  It was explicitly stated that there were no dropouts.
Other treatments:  Asked to avoid heavy loading for 3 days.  Exercises were initiated 72 hours following the initial injections and were demonstrated to the patients on their first sessions, including daily plantar fascial stretching, towel carrying using toes, rolling solid objects with the sole, dorsiflexion against resistance, resisted plantar flexion, inversion and eversion
Results:  Marked improvements in VAS, FFI and AOFAS scores at 3 months. DPT outperformed saline injection significantly.
Limitations: Small study with short follow-up to 3 months.
•Bottom Line 2018 Atlas: Every 3 week dextrose prolotherapy into plantar fascia origin outperformed saline injection @  3 month follow-up.
RTC #4 Mansiz-Kaplan B, Nacir B, Pervane-Vural S, Duyur-Cakit B, Genc H. Effect of dextrose prolotherapy on pain intensity, disability, and plantar fascia thickness in unilateral plantar fasciitis: A randomized, controlled, double-blind study. Am J Phys Med Rehabil 2020;99:318-24.
Link to abstract for Mansiz-Kaplan
Here is  a summary
•Design:  Double-blind, randomized, controlled study of injection of 15% dextrose (dextrose prolotherapy[DPT]) in .4% lidocaine twice at a three-week interval versus normal saline in .4% lidocaine at the same interval.  Peppering technique with five needle contacts, “drilling the fascia.”  Injection sites included metatarsal bone insertions, heel, and plantar fascia midpoint (not illustrated in the paper), with 1 ml at each location for a total of 5 ml injectate.
•Candidates:  ≥ 6 months of pain and failure of conservative treatment for one month, plantar fascia thickness > 4 mm,  and VAS pain > 5.
•Study size:   65 participants (32 DPT and 33 Saline)
•Bias:  Computerized random number generation for group assignment by “a blinded clinician.”
•Measures:  VAS pain (0-10),  and the Functional Foot Index (FFI) to 15 weeks. Ultrasound measures at the same time of day.  (9-10 AM)
•ITT versus Per Protocol:  Per protocol.  Three were lost from the saline group (2 of these were given dextrose injection open label due to severe pain) and two were lost from the dextrose group).
•Other treatments:  Avoid heavy activities for three days after injection.
•Results: 1 in the control group and 2 in the DPT group had failed ESWT.  Clinically significant improvements in both groups were reported,  but DPT significantly outperformed saline injection for VAS and FFI.  At 15 weeks the plantar fascia thickness decrease was significantly more in the DPT group, with a thickness less than 4 mm in 80% of DPT and 13.3% of saline groups and VAS  score of 0 in 60% of DPT and 0% of saline participants.
Limitations:  Short term study only to 15 weeks.  Method not well
Bottom Line 2020 Mansiz-Kaplan: Every 3 week DPT injection in multiple sites  for plantar fasciosis outperforms normal saline injection @ 15 weeks