PIT is different than nerve block
PIT, perineural injection treatment, is injection with a goal to restore normal function in nerves that cause chronic pain and degeneration.   Anesthetics prevent  nerves cells from functioning temporarily, preventing them from causing pain. However, as soon as the anesthetic wears off, the nerve cells return to their abnormal state. That is why  nerve "blocks" typically have a temporary effect.   In contrast, PIT , injection typically with dextrose, although platelet rich plasma has also been used, does not keep nerve cells from functioning.  Instead in appears to prevent nerves from producing the proteins that cause pain and degenerative changes, allowing them the function, but in a healthy way.   Two paradigm shift are implied by observations made thus far.
1.  Protein-producing nerves, when inflamed not only cause pain via production of substance  P (examples) and degeneration via production of CGRP (example),  but are the primary source of pain and degeneration  in chronic pain patients.
2.  Traditional inflammation (arachadonic acid pathway) is important, but not much in chronic pain patients,  as neurogenic inflammation (production of inflammatory proteins by protein-producing sensory nerves) is much more important in chronic pain.

Mechanisms for  dextrose (or PRP) injection in the  chronic pain need much more research.  The current theory  will be presented at the end of this section. However observations thus far about perineural injection treatment  that  may be key include: 1) Dextrose exposure of pain-producing nerves in chronic pain is followed by analgesia, not anesthesia of the nerves, 2) Cumulative benefit is noted with repeat injection of dextrose, consistent with  a reversible process, 3) Cumulative benefit appears to occur  with either plexi or individual nerve injection, and 4) Hydrodissection, the freeing up of nerves from areas of compression in fascia, may be a second mechanism of benefit to complement the direct exposure effect.

Dextrose exposure is followed by analgesia
The analgesic effect of dextrose was confirmed by Maniguis-Smigel et al in a 2017 RCT comparing the effect of dextrose versus saline, upon injection in the caudal epidural space, in patients with chronic low back and leg pain.
​Maniquis-Smigel L, Reeves KD, Rosen JH, Rabago PD. Vertical Small-Needle Caudal Epidural Injection Technique. Anesth Pain Med 2016;6(3):e35340. 10.5812/aapm.35340  PMCID: PMC5097855
Cumulative benefit is noted with repeat injection of dextrose
Maniguis et al then performed a study extension to see if the same pattern would be seen after repeated injection of dextrose in the caudal epidural space in these same patients.  They were injected every 2 weeks for 4 times. 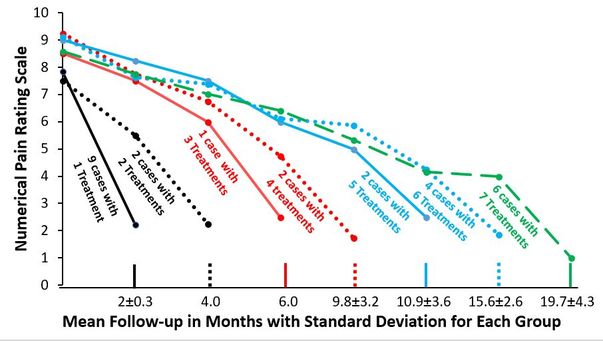 Although merely a retrospective data collection, this study of upper body injection with D5W without anesthetic, targeted  structures including stellate ganglion, supraclavicular brachial plexus, interscaline brachial plexus, cervical roots and thoracic roots in patients with chronic severe pain  appears to show  a similar cumulative benefit in multiple nerve structure exposed to dextrose with treatment numbers varying from 1 to 7. They were approximately every 2 months.
So what is the mechanism of benefit of PIT?
The short answer it, we don't know.  Current theories with literature support are as follows, but this continue to be under active investigation.  The following explanation is a bit "heavy" for non-medical people, and is offered for those who want to read a current explanation.  This is taken from  the discussion section of:  Maniquis-Smigel L, Reeves KD, Lyftogt J, Cheng AL, Rabago D. Caudal Epidural Injections with 5% Dextrose for Chronic Low Back Pain with Accompanying Buttock or Leg Pain: Results of a Consecutive Participant Open-Label trial with Long-Term Follow-up. 2018 Jnl Alt Compl Med. In press.

What cellular mechanisms may explain the apparent analgesic effect of dextrose in the prior RCT and in the current longer-term study? One randomized controlled study suggests a potential nerve-specific, or sensorineural, mechanism for pain reduction following perineural injection of D5W.33  The literature suggests three potential sensorineural mechanisms. First, dextrose may act at the level of a key pain modulator, e.g., an ion channel. The transient receptor potential vanilloid receptor-1 (TRVP1) ion channel plays a central role in development of allodynia and hyperalgesia in patients with chronic pain.34,35 Chronic neuropathic pain is associated with persistent upregulation of the TRPV1 ion channel.36 Mannitol, a metabolically inert sugar molecule that is structurally similar to dextrose, has been reported to reduce pain resulting from upregulation of TRPV1 ion channels in an RCT using a capsaicin pain model.37 Dextrose and mannitol have been anecdotally observed to have similar effects on pain in a co-author’s clinic (JL). Although TRPV1 ion channels have no monosugar receptors,35 certain monosugars may modulate the effects of TRPV1 expression in an allosteric manner35 through a class effect.

Second, dextrose may replenish low energy stores in the context of chronic pain. Peripheral nerves are particularly sensitive to glycopenia,38,39 and develop histopathologic evidence of damage with repeated reduction of systemic glucose by only 25%.39 Perineural glycopenia results in progressive depolarization and hyperexcitability of nociceptive nerve fibers, presumably through reduced effectiveness of the ATPase pump, which depends on dextrose for ATP production.40  In one study, nociceptive C-fibers exposed to a temporary glycopenic environment demonstrated a 653% ± 23% increase in action potential frequency within 15 minutes, with prompt return to a normal firing rate upon return to baseline glucose levels.40 Dextrose injections may provide analgesia through correction of local glycopenia. However, confirming that the perineural environment is relatively glycopenic will require microdialysis or other analysis methods for confirmation.41

Third, elevation of extracellular glucose levels by dextrose injection may hyperpolarize nerves via another mechanism. For example, activation of tandem-pore K+ channels by dextrose leads to increased K+ conductance and resulting neuronal hyperpolarization.42 Elevation of extracellular dextrose to 0.5% from normal levels of 0.1% in the gut hyperpolarizes enterocyte cell membranes promptly via the Na/glucose cotransporter (SGLT1),43 but SGLT1 has a much less significant role in transport across neuronal membranes.44 Although the mechanism of nociceptive fiber calming by dextrose injection has not been confirmed, a hyperpolarization effect is consistent with recent reports of co-administration of (D5W) to decrease the pain from infusion of certain chemotherapeutic agents45,46 or microspheres.47

In the current study, CLBP may be partially a product of sensitization of small fibers in the somatosensory system, particularly C-fibers expressing a TRPV1 channel, which is increasingly recognized as an important sensor ion channel both within and peripheral to the spinal cord.36,48 The source of nociceptive C-fiber sensitization is likely to be multifactorial, given the diversity of participants with low back pain enrolled in this study. The injection of epidural dextrose may reduce the firing threshold of nociceptive C-fibers via one or more of the mechanisms described above. However, these potential mechanisms, while informed by the medical literature, are speculative, have not been formally tested, and do not explain the temporal effect of diminishing pain with serial injections.