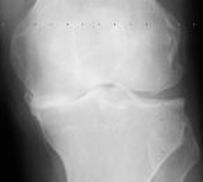 RCT # 2:  Dumais R, Benoit C, Dumais A, et al. Effect of regenerative injection therapy on function and pain in patients with knee osteoarthritis: a randomized crossover study. Pain Med. 2012;13(8):990-999.
ABSTRACT
OBJECTIVE: We assessed the effectiveness of regenerative injection therapy (RIT) to relieve pain and restore function in patients with kneeosteoarthritis.
DESIGN: Crossover study where participants were randomly assigned to receive exercise therapy for 32 weeks in combination with RIT on weeks 0, 4, 8, and 12 or RIT on weeks 20, 24, 28, and 32.
PATIENTS:  Thirty-six patients with chronic knee osteoarthritis.
INTERVENTIONS: RIT, which is made up of injections of 1 cc of 15% dextrose 0.6% lidocaine in the collateral ligaments and a 5 cc injectionof 20% dextrose 0.5% lidocaine inside the knee joint.
OUTCOME MEASURES:  The primary outcome was the Western Ontario and McMaster Universities Osteoarthritis Index of severity of osteoarthrosis symptoms (WOMAC) score (range: 0-96).
RESULTS: Following 16 weeks of follow-up, the participants assigned to RIT presented a significant reduction of their osteoarthritis symptoms (mean ± standard deviation: -21.8 ± 12.5, P < 0.001). WOMAC scores in this group did not change further during the last 16 weeks of follow-up, when the participants received exercise therapy only (-1.2 ± 10.7, P = 0.65). WOMAC scores in the first 16 weeks did not change significantly among the participants receiving exercise therapy only during this period (-6.1±13.9, P=0.11). There was a significant decrease in this groups' WOMAC scores during the last 16 weeks when the participants received RIT (-9.3±11.4, P=0.006). After 36 weeks, WOMAC scores improved in both groups by 47.3% and 36.2%. The improvement attributable to RIT alone corresponds to a 11.9-point (or 29.5%) decrease in WOMAC scores.
CONCLUSIONS: The use of RIT is associated with a marked reduction in symptoms, which was sustained for over 24 weeks.

RISK OF BIAS TABLE USING COCHRANE CRITERIA (Modified from Reeves KD, Sit RWS, Rabago D. Dextrose Prolotherapy: A narrative review of basic science and clinical research, and best treatment recommendations. Phys Med Rehabil Clin N Am; 2016; 27(4); 783-823;. DOI 10.1016/j.pmr.2016.06.001)
Summary of Dumais et al  knee RCT
Dumais et al compared DPT plus a home-based physical therapy program to home-based physical therapy alone in a randomized crossover trial. (Figure 16, table 2) Participants with chronic knee pain and any KL grading received injections at 0, 4, 8, and 12 weeks of 20% dextrose intra-articularly and 15% dextrose in coronary and collateral ligaments versus therapy only. Assessments were performed at week 16. After that, the 2 arms crossed over with a second assessment at week 36.  Participants had statistically similar baseline characteristics, and 86% were Kelgren III or IV. Improvement in composite WOMAC score was significantly more in the group receiving DPT for period 1 (21.8±12.5 vs 6.1±13.9; p<.05) and period 2 (9.3±11.4 vs 1.2±10.7; p<.05) with an overall significance of p <.001 using a standard statistical method of cross-over design analysis.51 (Figure 17).

​
Summary of Rabago et al  knee RCT
Rabago et al. conducted a 3-arm RCT comparing DPT to normal saline injection and a home-based exercise.52 (Figure 18, table 2) Participants with chronic knee pain and any radiological evidence of OA by KL grading were randomized to receive injection at 1, 5, and 9 weeks with optional treatments at 13 and 17 weeks consistent with a published protocol53. Effects were assessed using the WOMAC questionnaire at 0, 5, 9, 12, 26, and 52 weeks.
Participants had statistically similar baseline characteristics and 63% were rated Kelgren III-IV. By 9 weeks, participants receiving DPT reported substantial improvement in the WOMAC composite score (13.91 ± 3.2 points) compared with both control therapies. (Figure 19) Maximum benefits were recorded by 24 weeks and persisted through 52 weeks. At 52 weeks the DPT group improved more than either the saline injection or exercise groups in WOMAC composite score (15.3±3.3 vs 7.6±3.4 vs 8.2±3.3: p<.05). (Figure 19)
​
RCT # 4:  Sit RWS, Wu RWK, Rabago D, Reeves KD, Chan DCC, Yip BHK, Chung VCH, Wong SYS. Efficacy of Intra-Articular Hypertonic Dextrose (Prolotherapy) for Knee Osteoarthritis: A Randomized Controlled Trial. Ann Fam Med. 2020 May;18(3):235-242.
Here is the link to the PDF  for the entire article from the the National Library of Medicine secure website
Link to Sit et al. RCT on KNEE OA treatment
And here is  a summary of the study and its findings
•Design:  Randomized, double-blind clinical trial comparing four monthly intraarticular injections into the suprapatellar pouch with ultrasound guidance of 5 ml of 25% dextrose in water versus 5 ml normal saline.
•Candidates:  Knee pain ≥ three months, failure of 6 months of conservative care. (No severity restriction)
•Study size:  76 participants (38 in each group)
•Bias:  Off-site randomization using random allocation software. Sealed envelopes with gruop assignment were not  opened by the syringe preparer until after time 0 data was gathered, ensuring blind allocation as the syringe preparer has no interaction with study personnel. Blinding was maintained throughout the entire 12 months.  The syringes were wrapped to mask viscosity.
•Measures:  Western Ontario and McMaster Universities Osteoarthritis Index (WOMAC) at 1 year.
•ITT versus Per Protocol:   This was by intention to treat equivalent as linear mixed model analysis takes lost data into account.  There were only 2 dropouts, both from NS group, who were lost to follow-up at one year.
•Other treatments:  Usual care was allowed in both groups. Other injection therapies were to be avoided. Other care was tracked for between-group differences with no difference indicated in amount of usual care.
•Results:  The dextrose prolotherapy (DPT) group outperformed saline injection for improvements in WOMAC pain score (P =.022), function score (P=.014), and composite score (P = .020) , although satisfaction was high in both groups.  WOMAC score improvement exceeded the composite WOMAC MCID of 12 points.
•Limitations: Saline is not a placebo control.  Nevertheless, DPT outperformed a potentially active control
•Bottom Line 2020 Sit: 4 monthly IA DPT  injections  outerperformed 4 monthly saline injections @ 1 yr
​

RCT # 5:  Sert AT, Sen EI, Esmaeilzadeh S, Ozcan E. The Effects of Dextrose Prolotherapy in Symptomatic Knee Osteoarthritis: A Randomized Controlled Study. J Altern Complement Med. 2020 May;26(5):409-417.
Here is the link to the study abtract from a secure PubMed website
Link to Sert el al. abstract
Here is a summary of the study design and findings
• Design:  Randomized single-blind (for injection groups) clinical trial.  3 injection sessions (0, 3, and 6 weeks) intraarticular into patellofemoral joint (5 ml 15% dextrose /.25% lidocaine) and extraarticular areas (10 ml, divided between collateral and coronary ligaments, superior patellar pole, patellar tendon tibial attachment and pes anserinus) versus .45%saline/.5% lidocaine  in same volume and distribution versus only home-based therapy.
• Candidates:  Grade II or II KOA , symptomatic for > 3 months, failure of conservative treatment methods for an unspecified period.
• Study size:  66 participants  (22 in each of 3 groups)
• Bias:  Group assignments were made by independent blinded research using computer-generated random numbers.  The injector was not blinded but the rest of the team was.  Allocation was described, specificallly whether baseline data was gathered before or after the  group assignment was revealed to the injecting physician.
• Measures:  Western Ontario and McMaster Universities Osteoarthritis Index (WOMAC) and Health-Related Quality of Life Scores (HRQoL) at  18 weeks.
• ITT versus Per Protocol Analysis: Per protocol, but only one was lost from the DPT group for personal reasons and three from the exercise-only group.
• Other treatments: All participants received home-based therapies with tracking phone calls for education and encouragement.
• Results:  At 18 weeks the DPT group outperformed saline injection for improvements in WOMAC pain score (P =.002), function score (P<.001), and composite score (P = .002). Saline group outperformed exercise control in WOMAC function (P=.003) and composite score (P<.001). WOMAC  composite scores improved by 36, 22.5, and 9.5 for  DPT, Saline, and exercise groups.
• Limitations:  18-week follow-up is short.
• Strengths: Had a non injection control as well, similar to Rabago et al 2013 and used an intraarticular + extraarticular injection as well.
•Bottom Line 2020 Sert:  3 biweekly DPT injections both IA + EA > IA+EA NS > Exercise @ 18 weeks.
RCT # 5:  Chowdhury ZR, Mohammed SA, Khasru MR, et al. Pain and functional outcome with single dose 25% dextrose intra-articular injection in patients with primary osteoarthritis of the knee. Journal of Dhaka Medical College 2021;29:138-44.
Here is a link to the entire article
Link to journal site to get a full PDF
buHere is the abstact along with a  comment
Introduction: Osteoarthritis (OA) is the most prevalent chronic joint disorder worldwide and is associated with significant pain and disability. The introduction of 25% Dextrose injection has been viewed as an advance in the management of OA knee.
Methods: A prospective, randomized clinical trial was conducted with 84 cases in the Physical Medicine and Rehabilitation (PMR) department of BSMMU. Group A, 42 patients received single dose 25% Dextrose injection intra articular 8ml, exercise and ADL; Group B, 42 patients received exercise and ADL. Outcomes were measured by OA specific translated and validated Bengali instrument- Western Ontario and McMaster Universities Osteoarthritis Index (WOMAC) questionnaire and visual analogue scale (VAS 0-10). They were followed up for 6 months.
Result: At the initial stage and in week 4, there was no statistical difference between two groups regarding VAS score (as p value was >0.05). But in week 12 and 24, there was highly significant statistical difference regarding VAS score between two groups as the p value was <0.001. Again at the initial stage and week 4, there was no statistical difference between two groups regarding stiffness and physical function score. But in week 12 and 24, there was significant statistical difference regarding stiffness and physical function score between two groups as the p value was less than 0.05.
Conclusion: Intra-articular injection of 25% dextrose administered to patients with OA knee has significant effects in pain reduction and functional improvement
COMMENTS:  Not only is the treatment simple here (Inside the knee only), but it compares  a simple common knee exercise (active quadriceps  strengthening 10 repetitions twice daily) to the same exercise accompanied by just one injection of dextrose.  A look at the magnitude of outcomes showed a pain improvement of 6.74 to 4.33 on a 10 point scale which is clinically important.  (A 2.0 change on a 10 point scale is considered clinically important.)   Unfortunately a non-standard scoring was used for the WOMAC. Even more concerning is what appears to be somed  significant statistical limitations. For example the change score difference between groups is not consistent with the between groups differences mentioned in their output.  Nevertheless a total score difference of 31% in the dextrose group versus 16% in the exercise only group indicates a clinically important change in function.