Miracles by Religious Leaders and Their Documentation 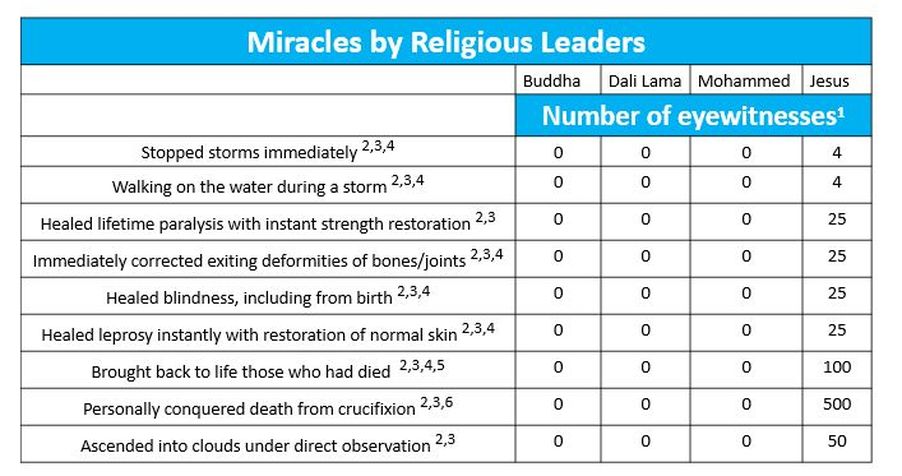 Note that Jewish Prophets Elijah and Elisha and New Testament disciples of Jesus (Peter, Paul, Philip and others)  performed miracles as well but not with the broad range of Jesus or with documented eyewitnesses from multiple independent accounts (gospels) with reliable preservation of text.  To my knowledge, other religious leaders did not perform miracles  that were documented.   Here is the key to the above table:
1  Eyewitnesses were estimated from the text description of miracle performance with  the closest disciples (4), the  larger group of disciples and followers (25 [ more than the 12 disciples}),  followers + skeptical observers (100),  documented eyewitnesses of  the risen Jesus in 1 Corinthians 15 (500) and  a conservative estimate of followers who saw Jesus' ascension from the Mount of Olives (50).
2  The event  was documented during witnesses lifetimes.  All 4 gospels were written on the basis of living eyewitnesses  to the events.  The events were preserved in the same meticulous manner as described prevoiusly under  the page "Integrity of Preservation". It is important to be aware that the 4 gospels were much alike but not identical, which is exactly what one would except from eyewitness testimony from different individuals.
3  At least some of the witnesses involved were willing to be tortured and killed for their testimony without any apparent recanting of their testimony.  Historical accounts suggest that 11 of the 12 disciples  were killed for their testimony, typically by beheading or crucifixion, and only John lived to an old age, after suffering torture and banishment.  It is notable that the disciples hid after Jesus was crucified, and the turnaround in their approach from timid to bold in the face of threats was an indication of their confidence after seeing the risen Jesus.
4  These miracles were reported repetitively. (And there is indication that the recorded miracles were a very small portion of the actual number. )
5  Resuscitation from death also included Lazarus who had been dead 4 days, with typical wrapping and  entombment, with family concerned that his body would be smelling by then.
6  Jesus conqured death after severe scourging which was often fatal by itself,  full crucifixion with no known reported survivors,   spearing in the chest to confirm death,  and full burial wrap constricting any possible breathing.
New Testament References to Miracles of Jesus  Discussed Above
Proudly powered by Weebly