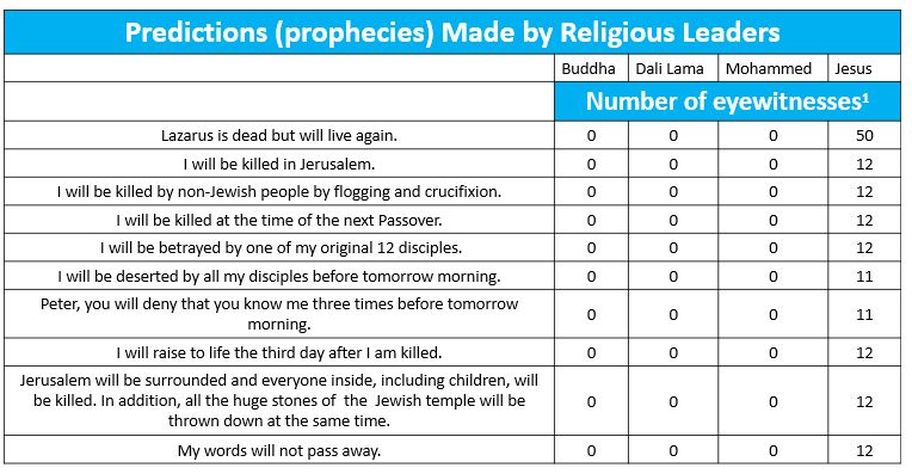 These claims by Jesus in His own works, as noted typically in  multiple accounts, follow from his claims of who He is
1  Eyewitnesses were estimated from the text description. Similar to the previous table, these events were  documented during witnesses lifetimes,  and these witnesses were willing to be tortured and killed for their testimony without any apparent recanting of that testimony.

Jesus continued to allow Jewish leaders to mistakenly think he was not born in Bethlehem as Micah predicted (they thought he was born in Nazareth) and purposely did not point out that Daniel predicted the year of his birth, or that Isaiah predicted a suffering messiah who would suffer for us as the "lamb of God". Jesus' primary purpose was not to be taken to become an earthly king. Jesus was God as judge who changed his clothes, came down to Earth as a man and paid our penalty for us.

I often hear people say, when hearing about a suffering savior, "That is not fair!" However, would you die for your children if it was the only way they could be saved? God is not subject to our limited human logic. His ways are higher than ours. This is a God of love and mercy who calls us to come to him up until the point of our death.
The point of this entire section can be summarized as:  The evidence  by fulfilled prophecies about HIm, fulfilled phophecies He offered, the great breath of miracles including raising others and himself from death after predicting that He would do so, in front of multiple eyewitnesses who did not recant under penatly of death makes  a very strong case that Jesus was truly God in human form and thus his statements about himself are not likely those of a liar or lunatic, and certainly not a good teacher alone.

New Testament References to Predictions by Jesus
►  "Lazarus is dead but will live again."
John 11:17-18, 40-45 Now when Jesus came, he found that Lazarus had already been in the tomb four days.
Bethany was near Jerusalem, about two miles off,  Jesus said, "Take away the stone." Martha, the sister of the dead man, said to him, "Lord, by this time there will be an odor, for he has been dead four days."  Jesus said to her, "Did I not tell you that if you believed you would see the glory of God?"  When he had said these things, he cried out with a loud voice, "Lazarus, come out." The man who had died came out, his hands and feet bound with linen strips, and his face wrapped with a cloth. Jesus said to them, "Unbind him, and let him go."  Many of the Jews therefore, who had come with Mary and had seen what he did, believed in him,

►  "I will be killed in Jerusalem and I will be killed by the non-Jewish people by flogging and crucifixion."
Matthew 20:17-19 And as Jesus was going up to Jerusalem, he took the twelve disciples aside, and on the way he said to them,  "See, we are going up to Jerusalem. And the Son of Man will be delivered over to the chief priests and scribes, and they will condemn him to death and deliver him over to the Gentiles to be mocked and flogged and crucified, and he will be raised on the third day."
​
►​"I will be killed at the time of next Passover (several days away)."
Matthew 26:2 "You know that after two days the Passover is coming, and the Son of Man will be delivered up to be crucified."
​
►  "I will be betrayed by one of my 12 disciples."
Matthew 26:21 And as they were eating, he said, "Truly, I say to you, one of you will betray me.
​
​►  "I will be deserted by all my disciples before tomorrow morning."
Matthew 26:31 Then Jesus said to them, "You will all fall away because of me this night. For it is written, 'I will strike the shepherd, and the sheep of the flock will be scattered."
​
►  "Peter, you will deny that you know me three times before tomorrow morning."
Matthew 26:33-34 Peter answered him, "Though they all fall away because of you, I will never fall away."  Jesus said to him, "Truly, I tell you, this very night, before the rooster crows, you will deny me three times."
​
►  "I will raise to life the third day after I am killed."
Example One: This was done in the presence of his disciples and other Jews who were demanding him to show them a sign.
Matthew 12:38-40 Then some of the scribes and Pharisees answered him, saying, "Teacher, we wish to see a sign from you." But he answered them, "An evil and adulterous generation seeks for a sign, but no sign will be given to it except the sign of the prophet Jonah.  For just as Jonah was three days and three nights in the belly of the great fish, so will the Son of Man be three days and three nights in the heart of the earth.

Example Two: In the presence of his disciples and others who were demanding a sign Jesus predicted that his body (temple) would be destroyed(killed) and he would raise again in three days.
John 2:19-21 Jesus answered them, "Destroy this temple, and in three days I will raise it up." The Jews then said, "It has taken forty-six years to build this temple, and will you raise it up in three days?"  But he was speaking about the temple of his body.

Example Three: In the presence of at least the 12 disciples. Predicted his death and resurrection and Peter argued with him about it.
Matthew 16:21-23 From that time Jesus began to show his disciples that he must go to Jerusalem and suffer many things from the elders and chief priests and scribes, and be killed, and on the third day be raised.  And Peter took him aside and began to rebuke him, saying, "Far be it from you, Lord! This shall never happen to you."  But he turned and said to Peter, "Get behind me, Satan! You are a hindrance to me. For you are not setting your mind on the things of God, but on the things of man."

Example Four: In Capernaum with a gathering of disciples.
Matthew 17:22-23 As they were gathering in Galilee, Jesus said to them, "The Son of Man is about to be delivered into the hands of men, and they will kill him, and he will be raised on the third day." And they were greatly distressed.

Example Five: Just prior to his death in Jerusalem.
Matthew 26:32 But after I am raised up, I will go before you to Galilee."
►  "Jerusalem will be surrounded and everyone inside, including women and children, will be killed.  In addition, all the huge stones of Solomon’s temple will be thrown down at the same time."
Matthew 24:1-2 Jesus left the temple and was going away, when his disciples came to point out to him the buildings of the temple. But he answered them, "You see all these, do you not? Truly, I say to you, there will not be left here one stone upon another that will not be thrown down."
Luke 19:43-44 For the days will come upon you, when your enemies will set up a barricade around you and surround you and hem you in on every side. and tear you down to the ground, you and your children within you. And they will not leave one stone upon another in you, because you did not know the time of your visitation."
[This all occurred 37 years later, in 70 A.D.]
​
​►  "My words will not pass away."
Matthew 24:35 Heaven and earth will pass away, but my words will not pass away.