WHO JESUS CLAIMED TO BE 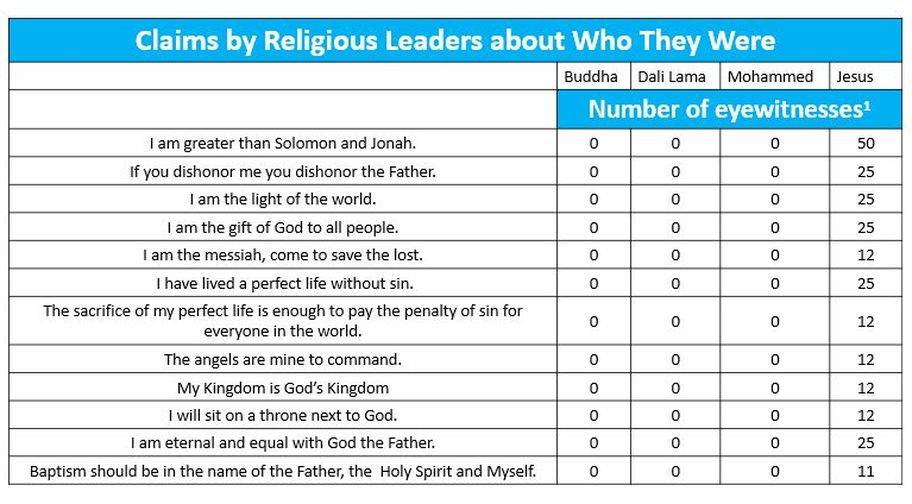 ​To my knowledge, other religious leaders did not make claims similar to those of Jesus.   These claims are not so outlandish that they would only have been made by a liar, a lunatic, or God in human form as Jesus claimed to be.  We have already discussed  fulfillment of prophecies and many documented miracles.
​
1  Eyewitnesses were estimated from the text description of  these statements being made to at least his primary disciples (12), a larger group including typically many pharisees  and non-disciples (conservatively estimated at 25), and  in the area of the Jewish temple upon questioning by pharisees/saduccess (conservatively estimated at 50).

Similar to the previous table, these events were  documented during witnesses lifetimes,  and these witnesses were willing to be tortured and killed for their testimony without any apparent recanting of that testimony.
​
New Testament References to Statements by Jesus About Who He is
​►  "I am greater than Solomon and Jonah."
This was to the crowds during the time leading up to the Passover.
Luke 11:31-32 The queen of the South will rise up at the judgment with the men of this generation and condemn them, for she came from the ends of the earth to hear the wisdom of Solomon, and behold, something greater than Solomon is here.   The men of Nineveh will rise up at the judgment with this generation and condemn it, for they repented at the preaching of Jonah, and behold, something greater than Jonah is here.
​
► "If you dishonor me you dishonor the Father."
John 5:23 that all may honor the Son, just as they honor the Father. Whoever does not honor the Son does not honor the Father who sent him
​
​► "I am the light of the world."
John 8:12 Again Jesus spoke to them, saying, "I am the light of the world. Whoever follows me will not walk in darkness, but will have the light of life."
​
► "I am the gift of God to all people."John 3:16 "For God so loved the world, that he gave his only Son, that whoever believes in him should not perish but have eternal life

​► "I am the Messiah; I have come to save the lost."
Example One to disciples and to others:
John 5:24 Truly, truly, I say to you, whoever hears my word and believes him who sent me has eternal life. He does not come into judgment, but has passed from death to life

Example Two to Nicodemas explaining how despite being affected by sin we can live through belief on Jesus.
John 3:14-16 And as Moses lifted up the serpent in the wilderness, so must the Son of Man be lifted up,  that whoever believes in him may have eternal life. "For God so loved the world, that he gave his only Son, that whoever believes in him should not perish but have eternal life

Example Four: Jesus give eternal life to his sheep and no one can take that away.
John 10:27-28 My sheep hear my voice, and I know them, and they follow me.  I give them eternal life, and they will never perish, and no one will snatch them out of my hand.

► "I have lived a perfect life without sin."
Example: Jesus challenges the pharisees to name any sin he has committed.
John 8:46 Which one of you convicts me of sin? If I tell the truth, why do you not believe me?
​
►  "The sacrifice of my perfect life is enough to pay the penalty of sin for everyone in the world."  John 3:14-16 and John 6:40 were covered previously
John 5:24  Truly, truly, I say to you, whoever hears my word and believes him who sent me has eternal life. He does not come into judgment, but has passed from death to life
John 10:27-28 My sheep hear my voice, and I know them, and they follow me. I give them eternal life, and they will never perish, and no one will snatch them out of my hand.
​
►  "The angels are mine to command."
Example one: While meeting with his disciples and preparing them for his own death to home he describes his coming again with his angels.
Matthew 16:27 For the Son of Man is going to come with his angels in the glory of his Father, and then he will repay each person according to what he has done.

Example two: To his disciples in response to a request about what events will take place when Jesus comes again. Here Jesus makes it clear he is sending out his angels.
Matthew 24:31 And he will send out his angels with a loud trumpet call, and they will gather his elect from the four winds, from one end of heaven to the other.

Example Three: To his disciples, again in describing end times.
Matthew 25:31 "When the Son of Man comes in his glory, and all the angels with him, then he will sit on his glorious throne.

"My kingdom is God’s Kingdom."
Matthew 16:28 Truly, I say to you, there are some standing here who will not taste death until they see the Son of Man coming in his kingdom."

► "I will sit on a throne next to God."
Matthew 25:31 "When the Son of Man comes in his glory, and all the angels with him, then he will sit on his glorious throne.
Luke 22:69 But from now on the Son of Man shall be seated at the right hand of the power of God."
​
► "I am eternal and equal with God the Father."
Example one: Uses the term I Am to describe himself, recognized immediately as blasphemy by the Jews.
John 8:56-59 Your father Abraham rejoiced that he would see my day. He saw it and was glad."  So the Jews said to him, "You are not yet fifty years old, and have you seen Abraham?"  Jesus said to them, "Truly, truly, I say to you, before Abraham was, I am."  So they picked up stones to throw at him, but Jesus hid himself and went out of the temple.

Example two: Claimed to be equal to the Father and the Jews recognized that and desired to stone him.
John 10:30-33 I and the Father are one." The Jews picked up stones again to stone him.  Jesus answered them, "I have shown you many good works from the Father; for which of them are you going to stone me?"  The Jews answered him, "It is not for a good work that we are going to stone you but for blasphemy, because you, being a man, make yourself God."